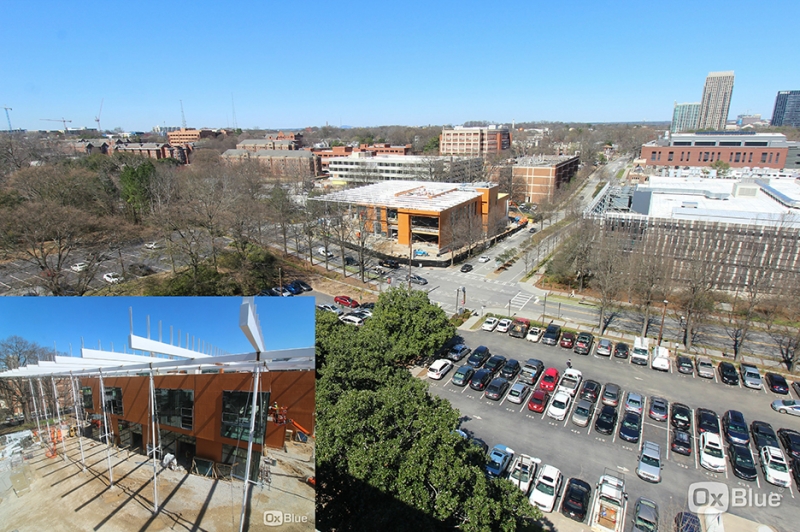 The Kendeda Building for Innovative Sustainable Design, currently under construction, is close to installing its photovoltaic (PV) system, which includes solar panels and the balance of system components. During operation, this renewable energy system will exceed all the annual energy needs of the building (predicted to be 34 kBtu/sf/year or a total of 328 MWh in the first year. In fact, simulations of the building’s normal usage indicate a substantial estimated net positive margin of more than 25 percent, which amounts to over 100 MWh in the first year. The system should produce 25 percent more energy than the building’s needs.

Let’s take a look at the different components of this system.

Matt Kantner of Katerra, who was a member of Uzun + Case’s team when he worked on the structural design of the project, explained the team’s structural strategy. As you can see in the image above, the design uses steel columns to support a tubular, horizontal array of steel beams. Steel was selected because of its high strength-to-weight ratio, dimensional stability, and weather resistance.

The tubular array design, which uses closed shapes, minimizes the use of material when serving long unbraced spans when compared to open I-shape beams. Additionally, the array deliberately follows the spacing of the building’s timber structure so as to deliver weight loads from the solar panels straight down to the mass timber columns below.

Long overhangs that expand the array size and shade the façade on south and west necessitated tall columns from the ground. Spars, the lateral pieces at the columns’ mid-span shown below, decrease the unbraced height of the column. These spars are pre-compressed by tension rods running from the top of a column to its bottom. Like the tubular array, the column design not only decreases material use but also adds visual interest, providing a visual ‘forces diagram’ for structural engineering students. 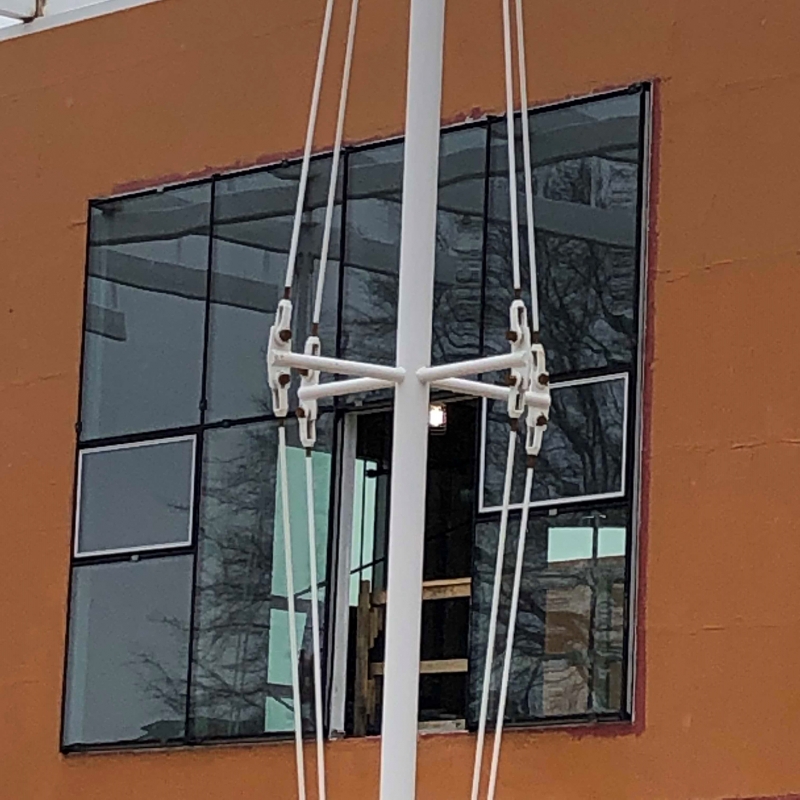 The PV array comprises 913 solar modules a total capacity of 330 kW, occupying about 15,860 square feet of area forming a floating canopy above the building. The panels will tilt from the horizontal plane by 5 degrees to face south. This slight adjustment will increase solar exposure and improve drainage. These modules represent state-of-the-art monocrystalline technology, which offer a 22 percent efficiency rate – most solar panels have an efficiency rate of 15 to 18 percent – but offer a considerably reduced efficiency loss due to the advanced N-type substrate material used in their construction. As a result, The Kendeda Building’s PV modules should be capable of providing for building’s energy needs for over two decades.

PV modules make up an integral part of a system. But, just as an electric car consists of more than its electric motor, a PV system is composed of inverters, conductors, conduit, disconnects, panelboards, and meters. Advanced string inverters segment the PV array into 10 sections and work together to convert the direct current (DC) power into grid-ready alternating current (AC) power. The components work together to create a system that complies with the National Electrical Code and ensures safe and efficient operation.

The PV system will connect to the campus grid and will feed any surplus energy back into the grid for use by other buildings on campus. The state of Georgia allows but does not require true net metering by utility companies – through which electricity is bought and sold back at a set rate. So in this case, electrical energy not used by The Kendeda Building will be consumed by other campus buildings instead of being pushed to the larger electrical grid that connects to metro Atlanta.

Energy storage is becoming an increasingly important concern as the percentage of decentralized renewable energy generation increases on the electric grid, and an energy storage system (ESS) is also featured in The Kendeda Building. A moderate-sized ESS will provide power for some lighting and control systems throughout the building in the case of interruptions in grid power, allowing the building to still function in a limited capacity and enhancing passive survivability.

The PV system’s initial cost (the cost of purchasing and installing the system), not including the ESS, is estimated at $2.50/watt, which represents a slight premium because of the selection of a high efficiency module.

A key imperative for a Living Building Challenge-certified building is to be net positive by more than 5 percent. For The Kendeda Building, simulations predict a yearly consumption of 328 megawatt hour AC [MWh(ac)] per year. PV yield analysis simulation comes in close to 450 MWh(ac) for the first year. Simulations by Sol Haroon, formerly of Georgia Tech’s High Performance Building Lab show that consumption will increase each year due to the building’s aging, while the energy produced will decrease each year due to the PV’s aging. However, the yield surplus created by the system design in year one ensures that the system will still perform at net positive even after 20 years of accumulation in energy consumption.

As the Niels Bohr quote so aptly explains, “Prediction is very difficult, especially if it’s about the future.” Simulation work coupled with risk analysis aims to capture the certainty of the net positive behavior year after year. Such an analysis paints a positive, indeed net positive, picture.

Want to learn more? The team is leading site tours on Thursdays at 3 pm. Sign up here.