Many college degree programs require students to work in their field, whether through practical courses or internships, before they graduate. Architecture is no different, but the possible paths to fulfilling that requirement are seemingly endless. Whitney Ashley, an Intern Architect in Lord Aeck Sargent’s Science & Technology practice area, shares her hands-on experience gained working on a design-build project while earning her Master of Science in Architecture from the Georgia Institute of Technology in 2015. 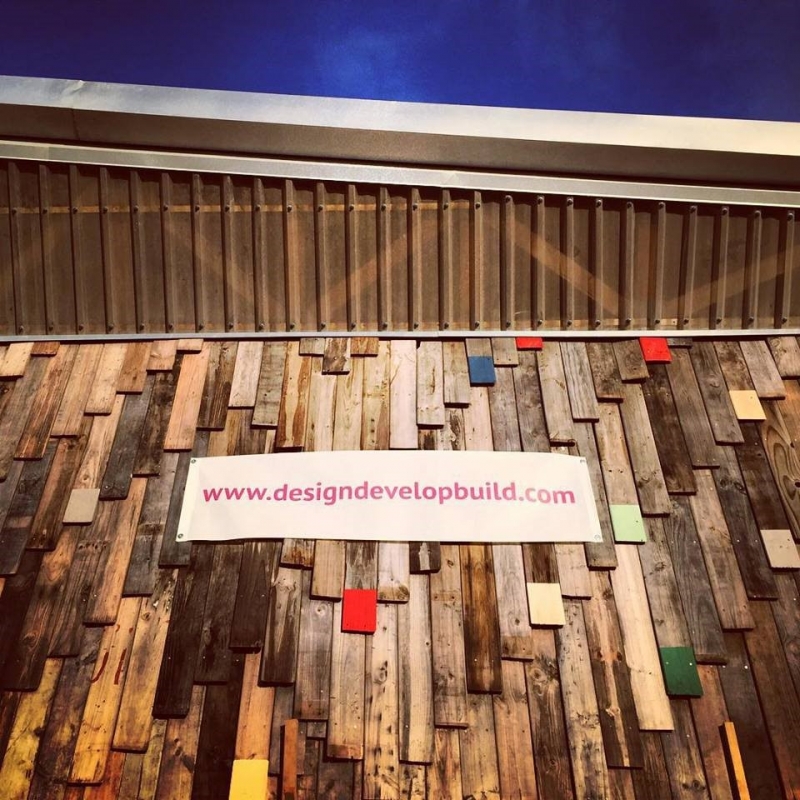 I was part of the award-winning Guga S’Thebe Children’s Theatre, located in Cape Town, South Africa, while earning my Masters of Science in Architecture, with a concentration in Digital Design and Fabrication. The project, which was recognized in the Cultural-Hall/Theater category, involved a team of architecture students from Georgia Tech, the Peter Behrens School of Arts in Dusseldorf, Germany and RWTH Aachen University in Aachen, Germany.

The Children’s Theatre provides a place for music, play, learning, and creativity for the children where it is a part of an existing facility called Guga S’Thebe located in the Township of Langa.  It is a place for the people of Langa to exhibit their art, culture and heritage. This building, which attracts tourists from all over the world, held this exchange program for the visiting students.  My group joined the theatre project in its third and final year of construction. 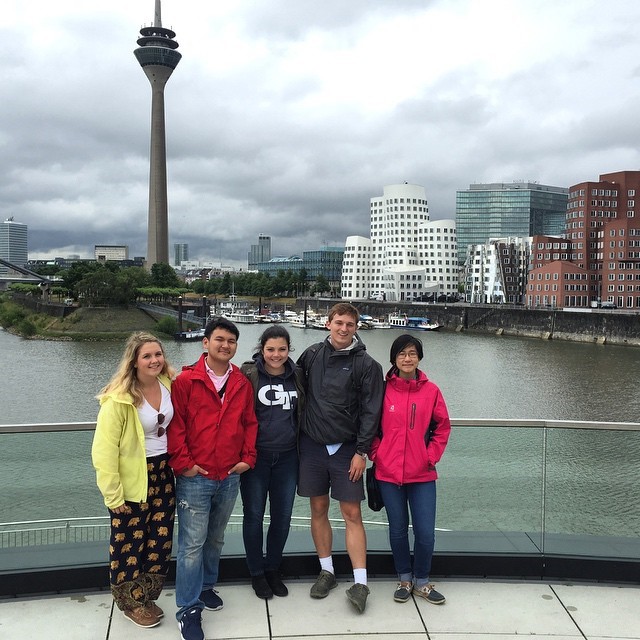 Our study abroad program began with the Georgia Tech students attending the German universities for a month. While there, we were taught different fabrication methods by creating various design-build projects for the theatre, such as tables, chairs and planters. The exercises included utilizing recycled materials such as used pallets, which students disassembled and repurposed to provide building materials for each project. This exposed us to hands-on design, fabrication and construction.

Our instructors also challenged us to create a digital proposal, using Rhino and Grasshopper, for a canopy structure over the existing outdoor amphitheater space at Guga S’Thebe. We knew that Digital Design and Fabrication were both essential skills we needed to master in order to be prepared before arriving in South Africa. 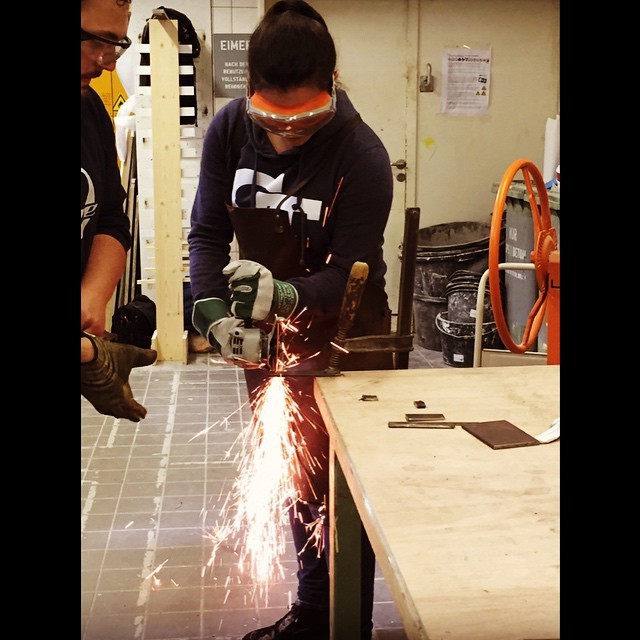 The American and German students soon arrived in Cape Town where we were quickly acclimated into a new culture. Our tasks included focusing on finishing the facade, landscape design and acoustic panels in the recording studio; and interior finishes in the kitchen, balconies and main space. The construction project included both students and residents of the Township of Langa. This created opportunities for a rich dialogue between the local people and the students. The project enabled students to learn about construction while also being exposed to new cultures and experiences. 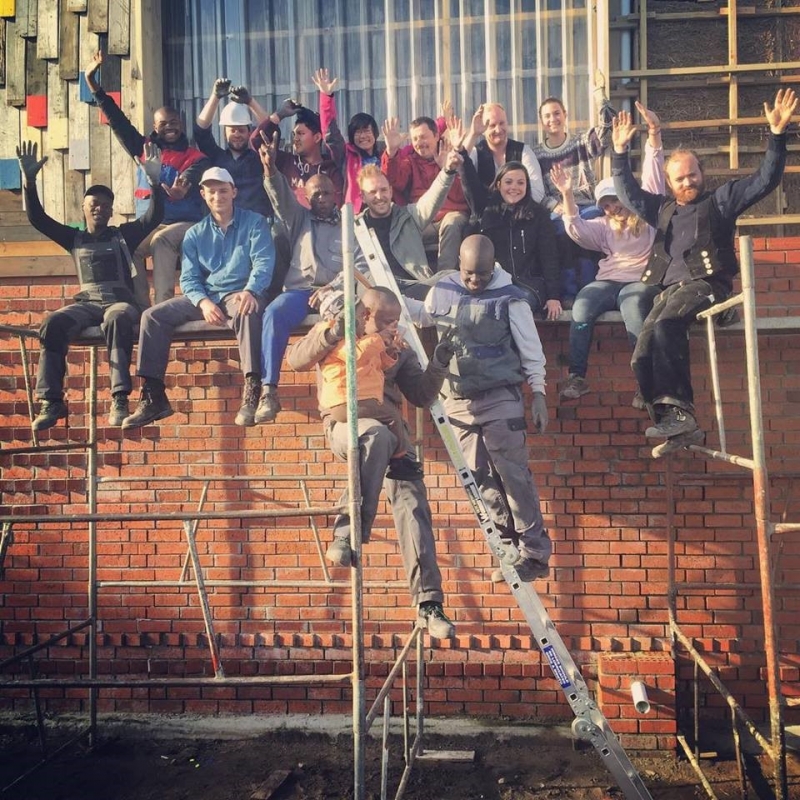 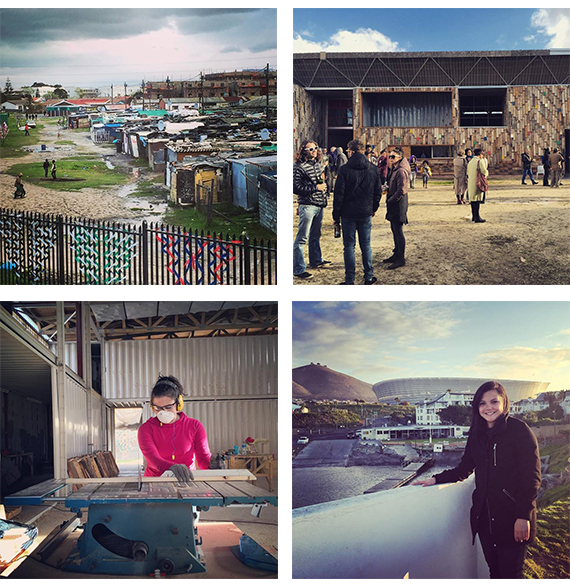 The built architecture at Guga S’Thebe is unique and culturally reflective. The building’s main structure and volume is derived from re-used shipping containers, which define an internal space for the theater. The materials in the project are recycled, reused or naturally renewable local from the community.

The Design-build project has helped me understand how to develop a design that includes using renewable and local resourced materials while bringing it to actualization.  The exposure of living in two countries has enabled me to experience new cultures. In the end, the goal was to bring everyone together to complete a project that has a major impact on the Township of Langa.  The most rewarding aspect was to be a part of a project that uses and develops my knowledge to create an environment that gives the children of Langa an opportunity to develop their skills and education in the arts.

The project was led by Design.Develop.Build. in collaboration with:

Learn more about the project at https://architizer.com/projects/guga-sthebe-childrens-theatre/